Many orangutans now live wild and free in the Bukit Tigapuluh ecosystem as part of the Sumatran Orangutan Reintroduction Centre (SORC). Although they’re free and no longer need Jungle School or lots of support from carers, they sometimes need supplemental food and the carers at SORC continue to monitor them to make sure they’re doing well. And the great news is they are, even during the non-fruiting season, when they can face food shortages. At these times, the FZS carers take supplemental food to tide them over. 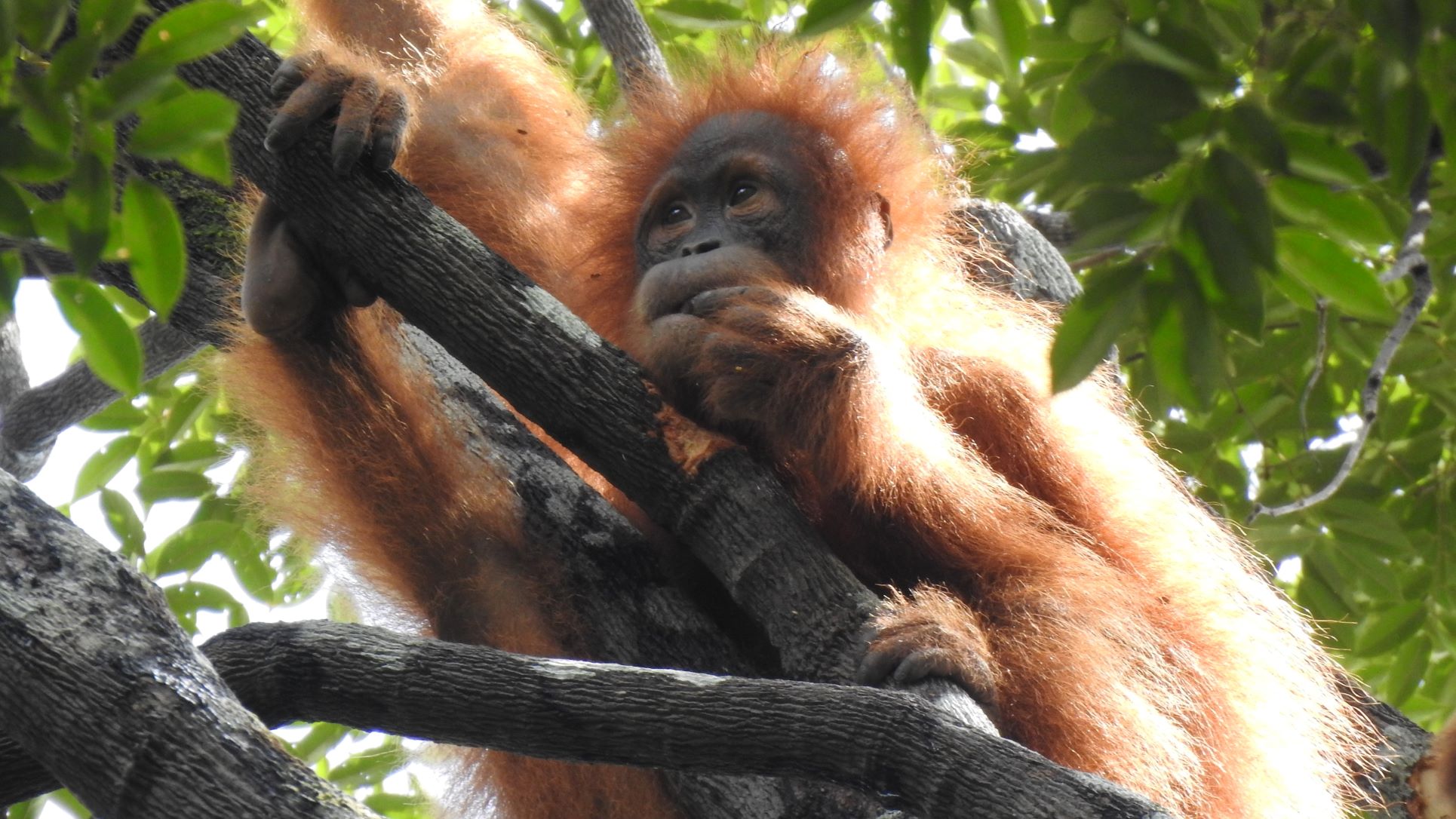 Anjeli and Arlo spent a lot of time resting, and because Anjeli’s foraging was low, the carers supported her with supplemental food. She mostly fed on ludai forest fruits. Anjeli sometimes displayed aggression towards her carers as she has Arlo and is protective of him. She was quite social with newcomers Bobina and Boncel, and they often foraged together in the same tree. The carers were also delighted to see that Arlo has started to learn how to feed on forest fruits and is suckling much less often.

Bobina and Boncel were released recently into the wild, and they spend a lot of time together. Bobina always follows Boncel to explore the forest and to forage for food, often imitating Citrawan and Boncel eating forest fruits. Both Bobina and Boncel have increased their feeding time in recent months, although they still take advantage of the supplemental food. Boncel’s nest building skills are still a little lacking, and she will sometimes reuse nests. Bobina and Boncel socialise with Citrawan and Violet, often foraging and sharing a nest together, and playing with the two youngsters Vanilla and Arlo. Bobina is not fond of Julius, and she always hides behind her friend Boncel whenever he’s near.

Citrawan, our most recently released adoptee orangutan, spent the most time resting, but has actually increased her movement through the trees. She sometimes still climbs down to the ground to move to another tree or to take remaining food provisions. She spent about a third of her time on feeding, mostly on bark and fruits. Citrawan can build nests, although the quality is not yet good enough. She explored the forest with Bobina and Boncel, and also followed Violet and played with Vanilla (Violet’s daughter). However, Citrawan was afraid of Jeky Chan so she avoided her. The carers also encountered her mating with Julius several times. Maybe she’ll become pregnant in the near future!

Femi spent most of her time resting, and it’s great to hear she mostly stays ten metres above the ground and is able to build good quality nests. She sometimes climbed down to the ground to move to another tree or collect supplemental food from the ground.

Sam and Sule, our beloved mother and son adoptee duo, are in good condition. Sam spent most of her time resting, moving about fifteen percent of the time. Sam often climbed down to the ground to take ripe fruits, move to another tree or to avoid other orangutans. The carers saw that Sam is dominant towards the other nursing females (Violet and Anjeli) and they always avoided her. However, she displayed social activities with the juveniles including Citrawan, Bobina and Boncel. Young Sule was active and independent, carrying out seventy-five percent of his activities away from Sam, becoming even more independent. He only clung to her for resting and suckling. Sule shows good foraging skills and he enjoys playing with the other youngsters Vanilla and Arlo.

Violet and Vanilla are also doing well. Violet spent about half her time on foraging, mainly for forest fruits. Violet has never been seen on the ground and stayed at an average ten to fifteen meters above the ground. She actively built nests to sleep at night or as shelter during rain and spent time foraging together in the same tree with Citrawan, Sam and Sule. Vanilla was active and enjoyed playing with other orangutans. Although she still depends on Violet when moving between trees, she has become more independent, spending at least ninety percent of her time away from her mother. Her dominant activity was foraging, and only clung to Violet for resting and suckling. In wonderful news, for the first time, Vanilla was observed building her own nests.

Jeky Chan and Jelly Bean are also doing well. Jecky Chan spent most of her time resting with her feeding decreasing to less than a quarter of her time. She always stayed ten meters above the ground and avoided any contact with carers. Jeky Chan didn’t show any social activity though she and other orangutans foraged for food together in the same tree. Jelly Bean is only two years old and still depends on her, clinging to his mother about two-thirds of the time. However, he has started to learn how to eat and build nests, imitating eating specific fruits.

Julius spent most of his time resting, with foraging making up less than a quarter of his time. He fed mostly on forest fruits and often walked on the ground when moving to another tree. Carers recorded social activities with Bobina and Boncel, when he followed their movements for several days.

You can help us care for these released orangutans through donation to our rehabilitation program: https://www.theorangutanproject.org/projects-overview/rescue-rehabilitation-and-release/

(Program run by Frankfurt Zoological Society and Ministry of Forestry)

Below you can see: 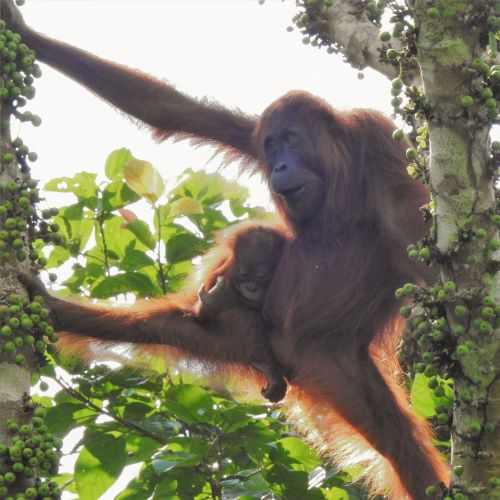 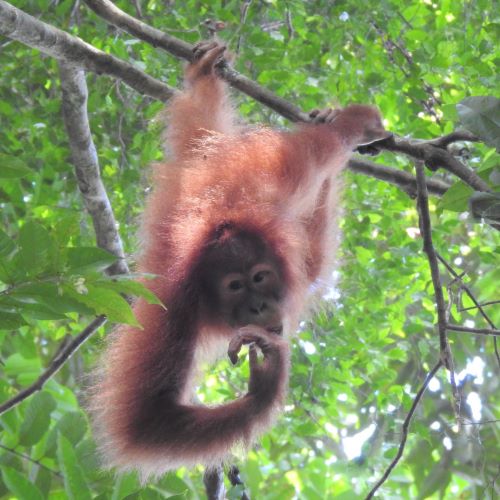 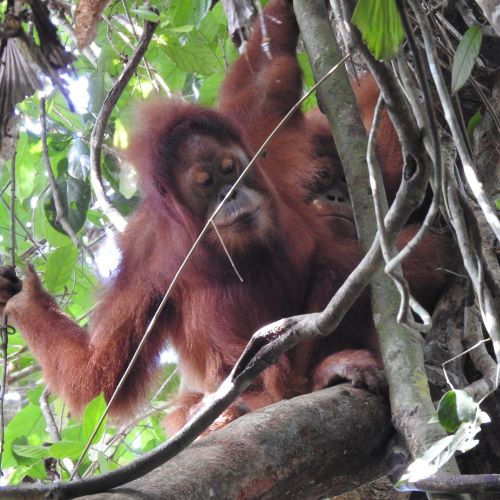 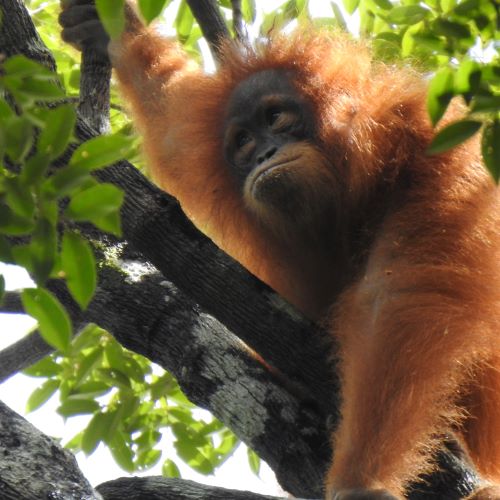 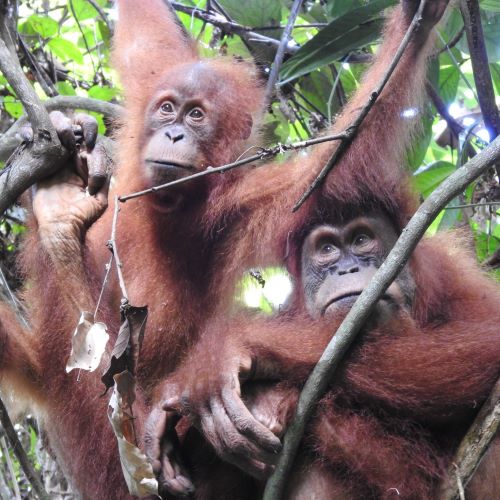 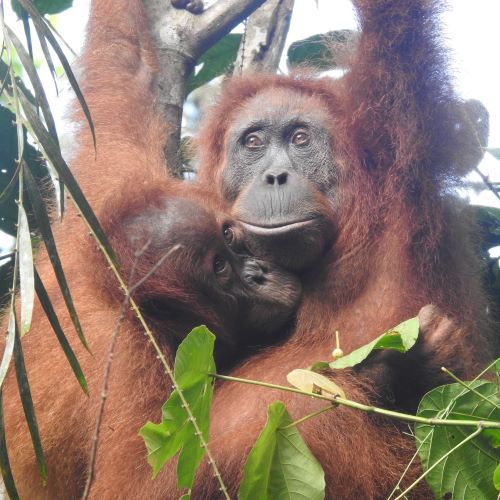