She has a good appetite and in general she enjoys all kinds of fruits, but the sour ones are her favorites. Since she moved to socialisation cage 6 months ago, we have reduce her milk intake from 500ml/day to 200ml/day and also added some greens into her diet, as part of her preparation before we send her to the Reintroduction Centre in Jantho.

Wenda is calm and friendly towards the other orangutans in her socialisation cage and is becoming more confident in interacting with older orangutans within the cage - like Manohara and she initiates contact with new comers into her group. She doesn't interact with keepers that much anymore and prefers to interact within her orangutan group. She still prefers sleeping in a hammock instead of a leaf nest. During the hot weather, Wenda is often seen playing with water from water tap in the cage. Previously Wenda had a stereotype behavior - she would repeatedly go around and around the cage following the same route. Luckily this behavior stopped in April. Lately she is very close with Brokoly and Hugo, but often fight with Ego and Ontong Bolang. Wenda had a fall in August 2012, which caused her to loose of one of her incisors, although this did not affect her eating. 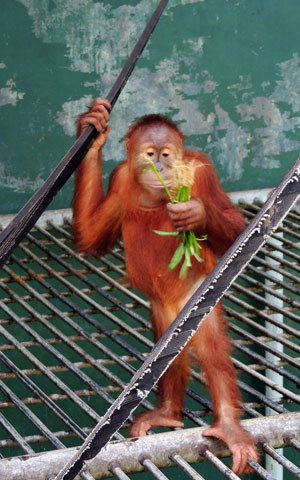 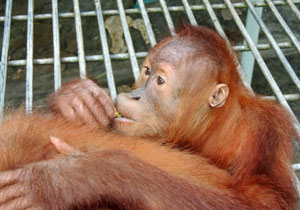