Into the wild As Mindow became a skilled climber, forager, and nest builder, we identified him as a likely candidate for permanent release into the wild.

We are thrilled to report that we were recently able to release Mindow back into his forest home! For several weeks Mindow was kept in pre-release quarantine with his friend Unyil Bejo. The two were kept separate from other orangutans and given frequent medical checkups to ensure that they would not pass any communicable diseases on to wild orangutan populations.

By the end of their quarantine, these two were very restless. During the journey to the release site, they clung tightly to each other in their transport cage. When their cage arrived in the forest, several other previously released orangutans gathered for the event. The moment the door was opened, Mindow raced straight up to a female orangutan and started to mate with her. While the female seemed perfectly compliant, the other male orangutans became enraged. Mindow soon found himself in an intense face-off. Mindow fought with multiple orangutan males throughout the next hour and never backed down.

The orangutans seemed to be mostly testing each other out and establishing dominance. No one appeared to sustain serious injuries. As the other orangutans continued to interact, Mindow was one of the first to move higher up into the trees to build his sleeping nest as darkness fell. He may eventually distance himself from the other males, or he may become a dominant male in the release area. In any case, the next day Mindow moved into the swamp forest where OFI rangers were able to follow him for several days. He never looked back. We are interested to see how Mindow’s wild life will unfold and will monitor him when we next encounter him. Thank you so much for helping Mindow reach this exciting new stage of his life! Mindow was released by OFI into the Seruyan forest on March 5, 2013 along with Boim, Manis Mata, and Unyil Bejo. 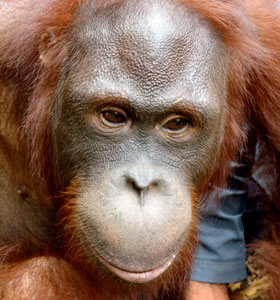 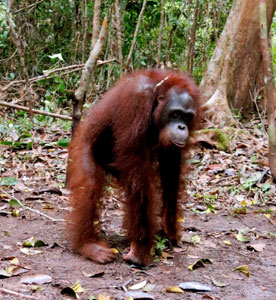