Wenda has spent almost a year in a socialisation cage with her group. Willy Tasbi used to be her bestfriend however Willy was transferred to the Reintroduction Center in Jambi in mid August 2012

Since then Wenda has become a little bit more spoilt by the keepers and demands more attention. After a few weeks she found two new friends Manohara and Coty and gets along well with them, as a result she is now less spoiled and demanding less attention.

Wenda's weight is stable at 19 kg scale. She has become more active, energetic and moves faster, swings from side of the cage to the platform in the middle. She often uses leaves as her bed and doesn't even mind sharing it with other orangutans orphans.

Wenda has a very natural and peaceful personality. She very rarely has arguments with other orangutans and prefers spend her time playing with them. When she is not eating fruit or making up leaf beds together with her buddies she's playing with them. She also likes share the food with her friends Manohara and Fren. 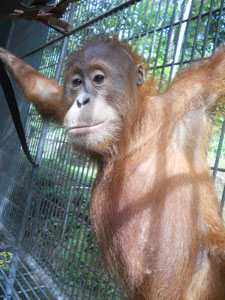 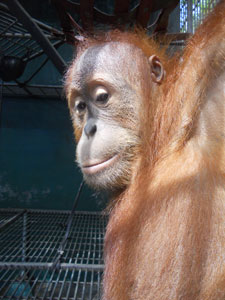