The Orangutan Project has partnered with FZS and provided vital financial support to the Bukit Tigapuluh (BTP) Landscape Conservation Program since 2008. What began as a small orangutan release program, has now grown into a large-scale conservation program that includes conservation of Critically Endangered species, community development, education and forest protection and restoration. The BTP landscape is a biodiversity hotspot and includes Critically Endangered Sumatran tigers, Sumatran elephants and Sumatran orangutans. Our goal is to preserve its wildlife and importance as a functional ecosystem. The main mammals found in the BTP Ecosystem can be seen in Sumatran Mammals- Photographs From Camera Traps in the Bukit Tigapuluh Landscape. 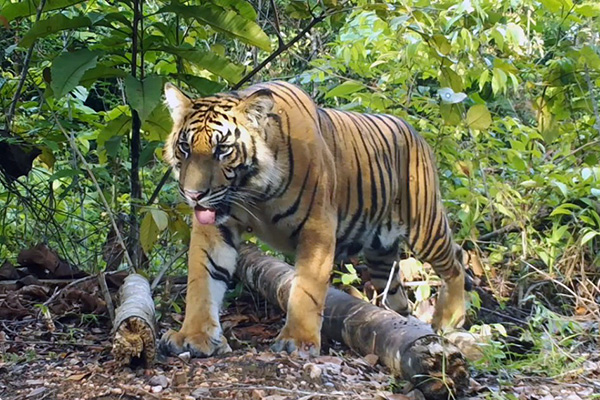 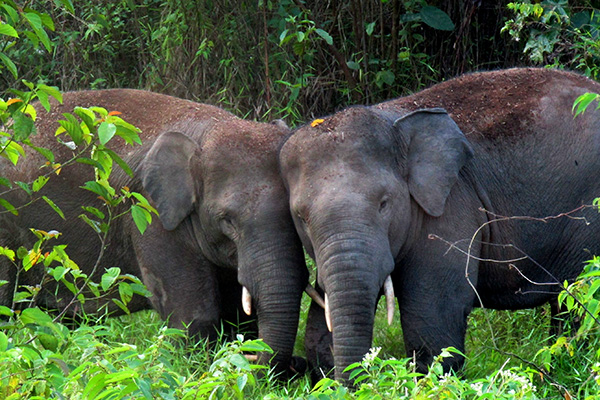 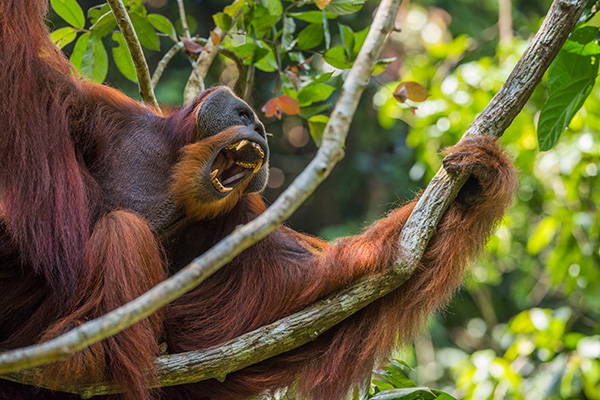 The BTP ecosystem encompasses one of the largest remaining lowland forest blocks in Sumatra. The core area of the BTP forest block (144,000 ha) was declared a national park in 1995. A survey in 2000 found that the BTP ecosystem was highly suitable habitat for the Sumatran orangutan. The Sumatran Orangutan Reintroduction Centre (SORC) is located in the BTP ecosystem, in the province of Jambi in Sumatra. It is one of only two reintroduction sites in the world for the Critically Endangered Sumatran orangutan. With approximately only 14,000 left in the wild and hundreds being killed every year it is imperative that viable released populations of Sumatran orangutans are built up outside of their current natural range.

Since 2002, over 170 Sumatran orangutans have been transferred to the SORC in BTP from the SOCP Orangutan Quarantine Centre in North Sumatra. It is highly beneficial if orangutans can be sent to the release site as young as possible so they can develop their forests skills during their rehabilitation program. These skills include nest building, traveling in the canopy and being able to identify and access various forest food sources including fruits, leaves, bark, cambium and insects. Young orangutans spend many years learning these skills from their mother in the forest, so the rehabilitation journey is a slow process. Orangutans develop at different rates depending on their age, temperament and how long they spent with their mother in the forest.

Extensive monitoring of orangutans occurs during and after the release process. Orangutans have a small transponder inserted between their shoulder blades so they can be tracked using telemetry equipment well after their release to check on their progress. This has been a huge development in allowing longer term monitoring and assessment of released orangutans. Released orangutans are given support as required as they adapt to their new forest life including supplement food if needed.  As orangutans become more competent in the forest, they can be checked on less frequently.

Numerous rehabilitated and released females have now given birth in the BTP ecosystem. This is a wonderful outcome as these females have lost their own mothers and have overcome so much to go on and rear their own offspring in the wild. The release area is monitored by Wildlife Protection Units funded by The Orangutan Project and many local people are employed by this program. 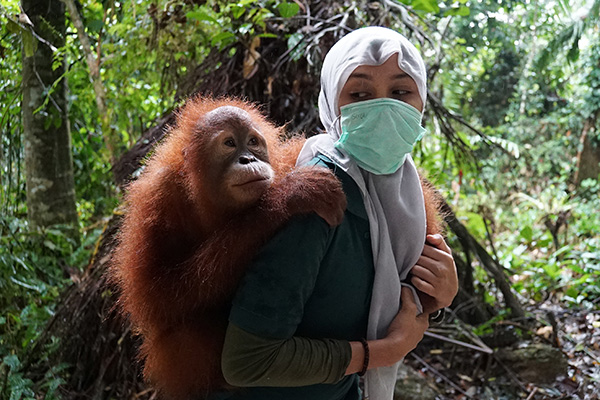 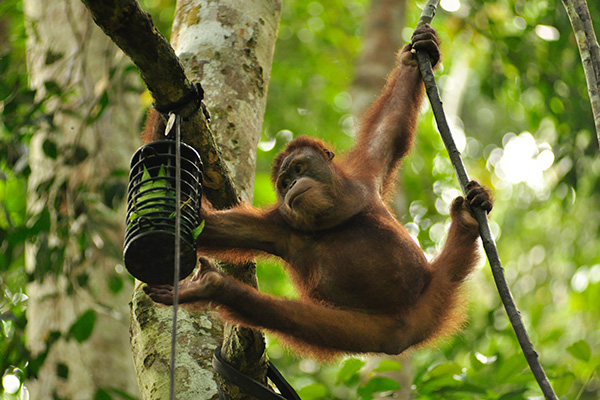 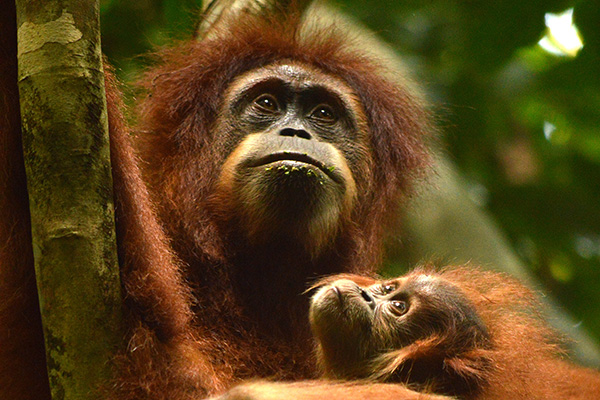 Unfortunately, this outstanding ecosystem is still threatened by illegal logging, illegal farming, mining, encroachment and poaching. The Orangutan Project has partnered with Frankfurt Zoological Society since 2008 in this area to create the Wildlife Protection Units (WPU) with the aim to stop further destruction and depletion of the globally important flora and fauna of the BTP ecosystem. The WPU is a multi-task unit that focuses on:

The objectives of the Ecosystem Monitoring Unit are to :

The objectives of the Elephant Conservation Monitoring Unit are to: 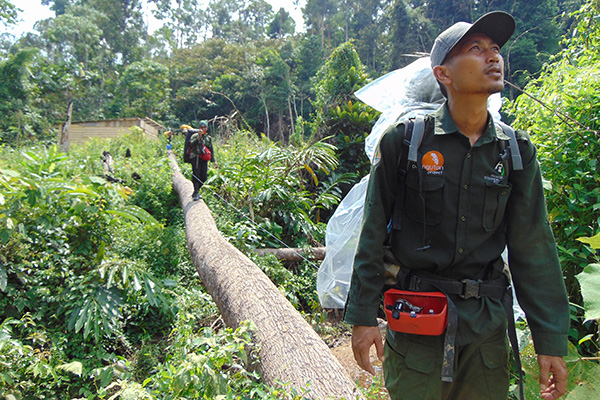 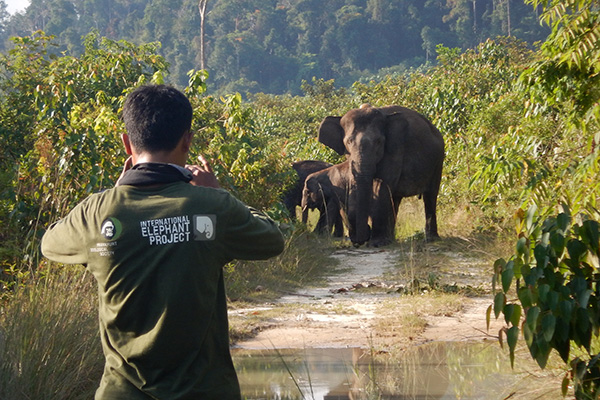 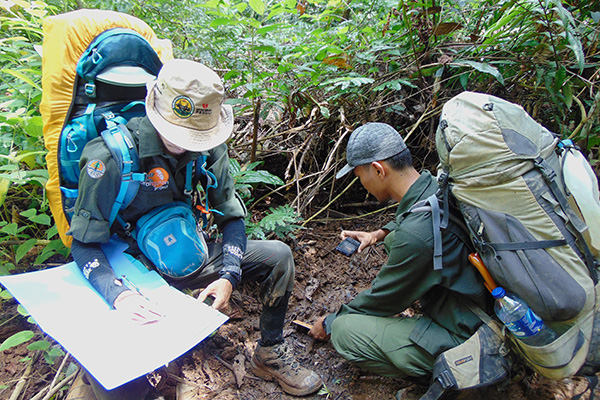 The Orangutan Project and Frankfurt Zoological Society formed a joint Yayasan (foundation) in Indonesia called Yayasan Konservasi Ekosistem Hutan Sumatera (KEHUS). KEHUS manages an area of 22,000 ha on the eastern boundaries of the BTP National Park that has recently been given the status of ‘Kawasan Hutan Dengan Tujuan Khusus’ or ‘KHDTK’ meaning ‘Forest Area with Special Meaning.’ The purpose of this special forest area is to continue its use as an ‘orangutan sanctuary.’ Forest restoration is also a high priority.

In order to halt deforestation and secure orangutan habitat in the BTP landscape, The Orangutan Project, FZS and WWF Indonesia formed a limited Company; PT Alam Bukit Tigapuluh in 2015 in order to lease high conservation value forest in the buffer zone of the BTP National Park as Ecosystem Restoration Concessions (ERC Blocks I and II shown on map).  These concessions (38,000 ha) were obtained in order to increase the area available for these mega-fauna species.

Whilst this is a significantly long-term project, the project itself is exploring community-driven initiatives to create sustainable economic enterprises including jungle-honey, vanilla, rattan and an education centre, so that eventually, the project will be economically sustainable.

A Mobile Education Unit has been established as the primary education and awareness contact for local communities about the importance of protecting the Bukit Tigapuluh ecosystem. The education team regularly visit local schools as well as farmers at the buffer zone of the BTP National Park to slowly build acceptance and support for conservation. It is crucial to build a good relationship with local people and to understand their needs and reservations regarding conservation.

Several small workshops and exhibitions are conducted by the Mobile Education team to introduce environmentally friendly forestry. The workshops focus on local communities to promote the set-up of community groups which than can legally apply for social forestry licenses. 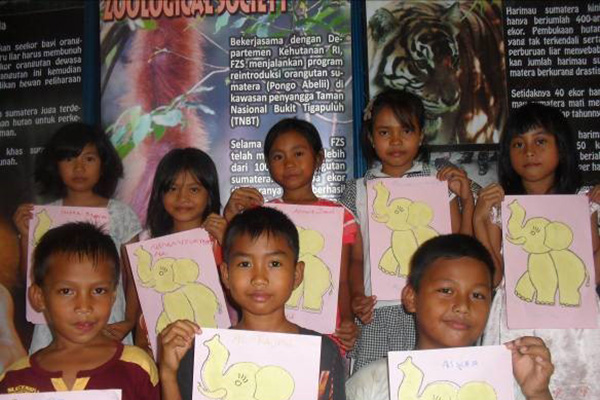 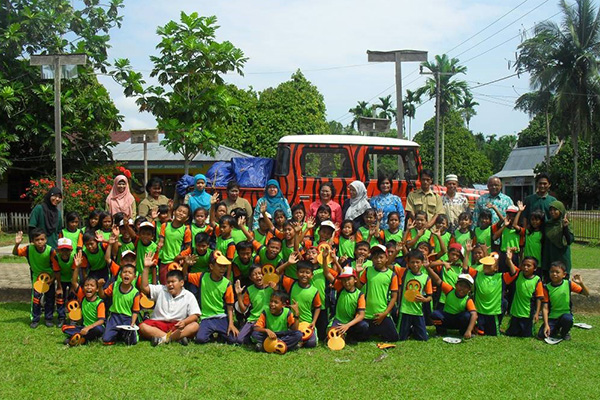 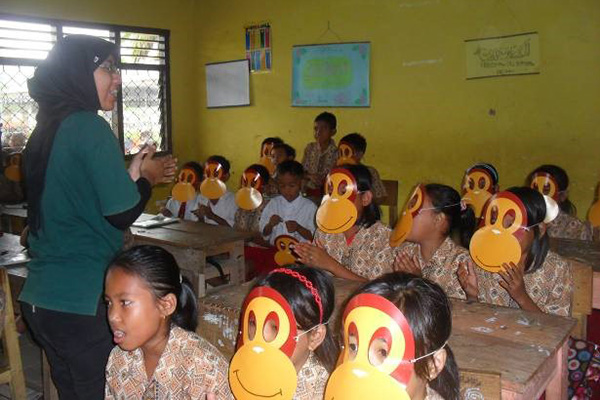