Wenda is now 16kg and is starting to get her permanent adult teeth. Wenda mostly likes to eat leaves and vegetables such as carrots, cabbage and kale but she is not so keen on the more juicy fruits. She still has her daily 250mL of milk every morning.

Wenda is a healthy orangutan and has had no health issues lately. Wenda is housed in a socialization cage with other orangutans. She interacts well with the other orangutans in her group. She is particularly close with an orangutan named Brokoli and is quite protective of him.

Wenda is not a particularly energetic orangutan. She will often just rest in her hammock or swing. Wenda has started to use the leaves to make a nest at night which is a necessary skill to have once she is back in the jungle.

It is hoped that Wenda will be sent to the Jantho Orangutan Reintroduction Centre in December for release so stay tuned. 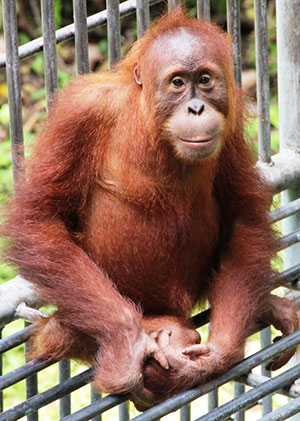